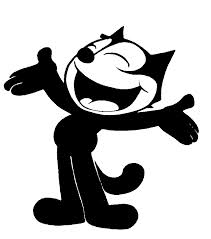 In amongst all the madness that the summer term brings (especially with new curriculum and new GCSE specs to plan for) a group of us have had the opportunity to go to another school to pick up some new and fresh outstanding ideas for teaching. Maiden Erlegh was the venue, and we were there for two days, one session last Tuesday and again today. This gave us an opportunity to try out tasks that we had tried on the course before today. Admirably led by Martin and Kat, we left the first day buzzing.

My favourites are below:

Golden Nuggets:
Who doesn't love a post-it for engagement...! The Golden Nugget sheet was given to us at the start, with a pile of post-its, at the start of the session. The purpose is to gather key points throughout the session, the ones that make you think "Wow, that's the one!". The sheet has 6 boxes on, and if you found yourself with more than 6 golden nuggets, you have to then work out which one you drop off. 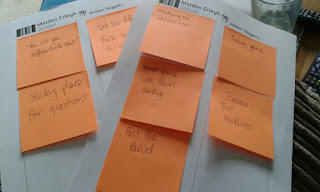 It is a great way to gather and filter the most important points throughout a session.
This was the first thing I trialled on my return to the classroom. My year 10s (who are split between 3 teachers) are very reluctant active participants and collaborators, so I am forever trying to find ways to inspire them. They are also still very wobbly with tenses. 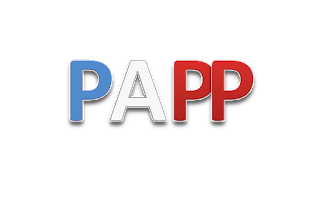 So I introduced a new perfect tense acronym, PAPP, and stripped back to the basics of the tense. Person, Auxillary, Past Participle. We spent the lesson working through this, and I had given them the golden nugget sheet at the start.
The responsibility is then on the students to note down what is important to them, things they need to know and want to take away from the session. Which they did. At the end of the lesson I asked them for feedback, and the majority loved it. So it is definitely something I will use on a regular basis, not only with them but with other year groups. 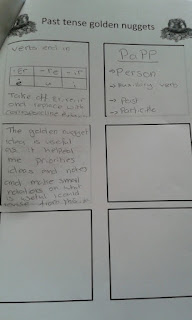 Outstanding Body
The task for this was on a sheet. All that was on the sheet was an outline of a body and the question "What makes an outstanding teacher?". In groups we bombarded the page with our ideas in the set time (3 mins) given. The feedback was done in groups, going around the room with each group saying something they had written, that hadn't been said before. Questions were asked for more detail, but the idea was to be the last man standing - have more responses than any other group. 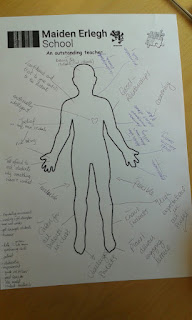 ﻿
The challenge then was to work out how we could apply it to our subjects. So I have used it twice since Tuesday:
1. Year 9s have been researching Burkina Faso for their projects that they are working on in groups. So in their groups, I set them to task on an outline of the country and said it was a competition. They flooded the sheet with facts and figures, using their research notes. They then took turns in groups to say one of their facts, with the idea that they would gain facts from others as well. 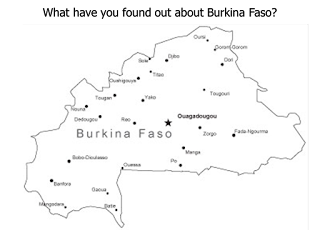 2. Year 7s are working on their Gruffalo unit, so I used an outline of the Gruffalo for them to create as many description sentences of the Gruffalo as possible in the time given. I had to stop time to point out that the best way to win the competition is if all members of the team participated at the same time, but the ideas and outcome were very good.

Spot The Difference
This is a task that I have started to trial with year 10s, to increase their confidence with spoken French, but also with working together confidently. In essence, students sit back-to-back, or next to each other with a barrier in between them, with a Spot The Difference picture each (which I label A and B to aid myself!).

The students then take turns to make a statement about their picture, so that together they work out what the differences are - by speaking to each other, not by showing each other the pictures! It seemed the perfect opportunity to reinforce prepositions, and use "il y a...", over and over. So at the moment the students have started to work together with someone else who has the same picture (so A students work with A students to prep), mainly to gain the specific vocab. They will then be in a position to work with a B student back-to-back.


The best part of the sessions is when one of the leaders, Martin, asked with every session, "How will you differentiate that?". So it is all well and good coming up with an amazing resource, but the key idea is that it can be differentiated for all.